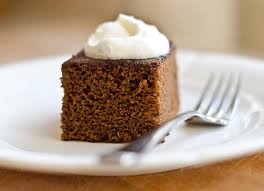 My daughter just told me that eight US Presidents were born in Virginia, most notably of course was our first President, George Washington. It was in the 1920s that this recipe was discovered by the Daughters of the American Revolution in the attic of Kenmore. It became a saving grace for the mansion as the recipe was then sold for 10 cents each towards the steep cost of purchasing and restoring the home.

The recipe was created by George Washington's mother, Mary Ball Washington and passed onto his sister, Betty Washington Lewis whom lived at Kenmore Plantation. At the time the recipe was found in 1922, the mansion was in dire disrepair and DAR was about to lose the home because they could not meet their financial obligations

The Kenmore Plantation was a comforting place for the thousands of soldiers based at Ft. AP Hill. They would travel to downtown Fredericksburg to relax and enjoy their military breaks. The ladies of DAR served ice tea and gingerbread to over 60,000 soldiers on the lawn at Kenmore. 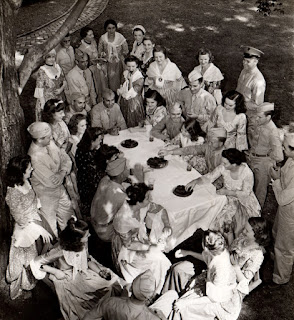 In the 1930's DAR heard that the cake mix company Dromedary was holding a gingerbread recipe contest, the winner of the recipe would be offered a deal to package their gingerbread into a simplified mix. Kenmore's Gingerbread recipe beat out some stiff competitors including a Pillsbury recipe and went on to secure a $38,000 deal with Dromedary. They also made a deal to receive the cake mixes at a steep discount. The mixes were used to serve hundreds of thousands of visitors at Kenmore until the late 1980s. 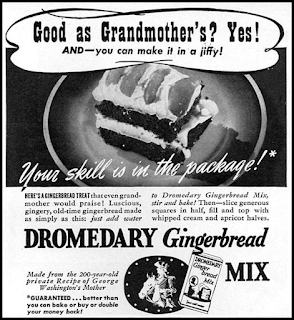 I can vividly remember sitting in the dining room at Kenmore on a field trip with a warm cup of tea and thick slice of gingerbread, it was absolutely delicious.

Place rack in the center of the oven and preheat oven to 350. Lightly grease a 9 x 13" pan with butter.

Grate orange zest and cut orange in half. You'll want to get 4 Tablespoons of juice from the orange. Place zest and juice in a small bowl, set aside. Place butter into large bowl and beat until creamy, add brown sugar and molasses and beat until smooth. Fold in flour mixture along with milk, brandy, eggs, orange juice and zest. Beat until smooth.

Place batter into prepared pan. Bake until the cake is set and the top springs back slightly with pressed, about 35-40 minutes. Let cool in pan for about 10-15 and then serve warm with whip cream. 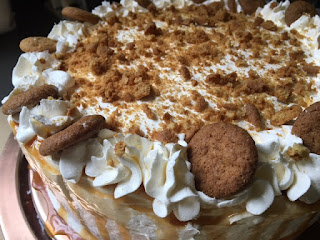 It was such a sweet, sweet Summer, I'm already missing the lazy days on the River and not caring what in the world my children dressed themselves in.  Fall came quickly in Fredericksburg this year, before I even blinked leaves are turning and there is a chill in the air. It's that chill that has me craving my favorite fall desserts. Pumpkin cake always falls at that top of that list. Normally, when I make pumpkin cake I make a simple sheet cake with cream cheese icing. This year I fancied it up a little bit and tried my hand at the popular drip cakes. Always fun to mix up a simple recipe into something new. I have so many variations of this recipe, I'll include a few below. Pumpkin Cake Recipe: 4 eggs, beaten 1 15oz. can pumpkin 2 c. sugar 1 c. oil 2 c, flour 2 tsp. baking powder 1 tsp. baking soda 1/2 tsp. salt 2 1/2 tsp. cinnamon 1/2 tsp. nutmeg Beat eggs, pumpkin, sugar and oil in large bowl. Add in remaining ingredients, do not over mix.

Two recipes to share today, one was given to me by a friend of a friend turned friend, Kitty. This is the most wonderful Margarita on the rocks that I've ever had. When made frozen, this margarita takes on a frothy consistency which makes it all too easy too drink. Kitty is a fantastically fun person which is fitting for this drink. Enjoy... Sweet Potato Queens Knock You Naked Margarita 12 oz. frozen limeade 12 oz. tequila 12 oz. 7-Up 1 Corona Mix all ingredients in a pitcher along with orange, lime and lemon slices. Let sit at least 20 minutes in fridge before serving over rocks or blending with ice. (If serving frozen, remove fruit slices prior to blending). The other recipe is one that my daughter Emma June and I discovered in one of our library books from our weekly trip. The book was called Apple Farmer Annie and the recipe is Applesauce Cake. It turned out perfectly moist with just the right amount of sweet and spice or as Emma June says, "sweet and tasty". 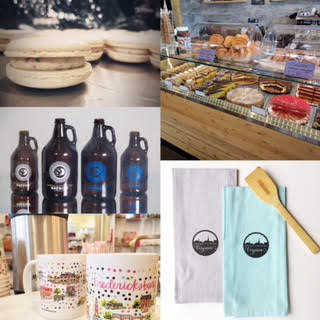 Five Foodie Finds for your Hostess

With the holidays right around the corner I like to have a few go-to hostess gifts in mind for the engagements we have planned and those that pop up at the last second. A hostess gift should be something kind and thoughtful, never over the top and never anything that requires your host to put in extra work. I’ve scoured our downtown streets to find five of my favorite foodie gifts for your holiday hosts! 1)  Box of Pastries for Tomorrow Morning – We all know how exhausting throwing an event is, no matter the size, so give the gift of a lazy morning to your hosts with a box of pastries from The Italian Station located at 620 Caroline Street. 2)  Chilled Growler from Spencer Devon – Ready to Pour at the party or for your guest to savor on their own! The Growlers come in 32 ounce which runs $17.00 filled and $10.00 for a refill or 64 ounce running $28 filled and $17.00 for a refill. The gift that keeps on giving! Spencer Devon is located at 106 George Street. 3)Fr